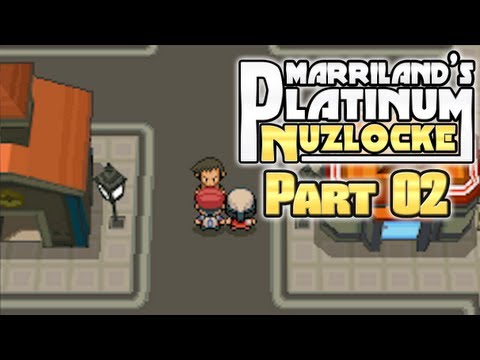 [ Welcome to Marriland’s Pokémon Platinum NUZLOCKE, featuring some challenging extra rules! In this episode, Quiet does some training and then challenges some local Trainers before arriving in Jubilife City, where she runs into a strange fellow as well as a pack of clowns.
______________________________

RULES OF THIS NUZLOCKE CHALLENGE:
[Video:]

• I can only catch the first Pokemon on any route or area. Dupes Clause (not counting any Pokemon registered as caught OR any part of its evolution line) is in effect, but I only have a maximum of three tries on a route or area, period.
• Fainted Pokemon are considered dead and must be released.
• I must nickname all Pokemon. I’m not going with a specific theme this time, though.
• The Battle Style must be set to Set at all times, preventing me from switching out before a Trainer can send out their next Pokemon.
• Items may not be used from the bag in battle, other than Poke Balls (any kind). Held items are just fine, though.
• At no point outside of battle can my Pokemon’s level be higher than the next Gym Leader’s highest level Pokemon, or higher than level 59 before challenging the Elite Four. If ever they are, they must be released immediately. (This means the level steps are 14, 22, 26, 32, 37, 41, 44, 50, and 59 — I’ll give Cynthia a slight edge.)
______________________________

MUSIC USED IN THIS VIDEO:
GRANTOURIN
“Grantourin” by Shlipstick can be found over on Soundcloud:
•

GET THE 3D SPRITES OF THE POKÉMON IN THE MARRILAND POKÉDEX:
• (just click the “Sprite Viewer” button on a Pokémon’s page!)